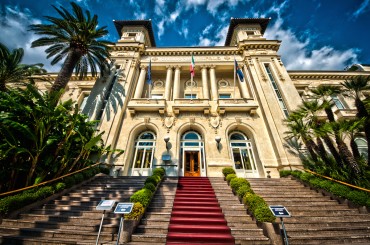 Municipality provides for civill wedding in Sanremo in the Town Hall, as well as in two villas, where the marriage ceremony take place in the garden surrounded by lush greenery and flowers, or in the halls.

The Town Hall of Sanremo is located in the park famous for its centuries-old fig trees. The wedding hall is perfect for weddings with a small number of guests.

Within walking distance from the Town Hall and a huge park of Villa Ormond is a beautiful villa built in 19th century for cavalier Giovanni Zirio. Now the villa is owned by the municipality, and it placed the Department of Tourism, Municipal Symphony Orchestra, the regional observatory for the study of plant diseases. Wedding ceremony in villa can only be done in the fourth Sunday of each month.

One of the most beautiful villas in the city - the famous Villa Nobel — is a wedding venue for civil ceremony in Sanremo. The villa, where the famous scientist spent the last years of his life, is located among the ever green park, near the embankment and the city center. Here a wedding ceremony can be held in the first, third and fourth Saturday of each month, on the second Sunday of each month, as well as on Tuesdays, Wednesdays and Fridays.

In 30km from Sanremo a magnificant Villa Bianca (or Villa Grock) is located. It brings together, in addition to a variety of architectural styles, all the elements that were part of the vast cultural and imaginative world of the great artist Adrien Wettach known as Mr Grock. The lake-pool, used by Grock to go fishing and alternately for swimming in the summer, is a real gem of creative imagination, rich in symbolism.

Civil wedding in the magic temple staying on the artificial lake will have exotic and oriental taste.

The open terrace in summer time and the ballroom in winter time could be used for wedding refreshment and banquet.

Wedding in Sanremo will give you the most fantastic emotions.