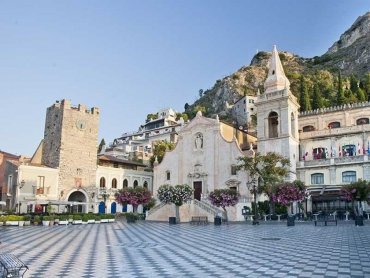 Taormina is a famous Sicilian resort located on the Mount Tauro. It offers stunning views of the sea and the Mount Etna. Taormina abounds with palm and cypress avenues, citrus groves, gardens with numerous flowers. For many centuries its beauty and its desire seduces writers, artists, aristocrats and ordinary travelers. Since the XIX century the city got glory of the elite resort. It is the owner of the international summer festival of arts on which crowds of fans come from around the world. The city is rich in ancient monuments, historic villas and palaces. One of these is the Palazzo Duchi , which hosts civil wedding in Taormina. The Palace was built in the 14th century and it is one of the masterpieces of Sicilian Gothic art, which merged the features of Arabic and Norman architectural styles. In front of the palace a beautiful garden is located, with its historical well in the center for collecting rainwater.