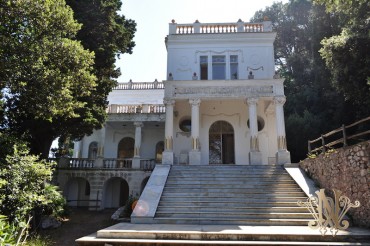 The Villa by the sea in Capri is a detached residence in a wonderful garden surrounded by climbing plants and cypresses. It was built by the French Count Jacques d'Adelsward Fersen in 1905. Fersen found for his Villa a romantic place on a cliff peak overlooking the sea, with arcs and dome roofs to give it a classical flair.

The Villa in Capri island was formerly called "La Gloriette" but subsequently took the name of Villa Lysis as a sign of homage to Liside, a disciple of Socrates mentioned in one of Plato's dialogues.