Villa 3 in Florence with garden 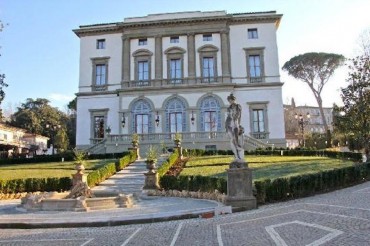 The luxury villa in Tuscany is located inside a centuries-old park, on the hills just outside the historical center of Florence.

The Villa is an aristocratic residence built at the end of the XIX century and reflects the architectural styles of that period, dominated by a strong eclectic décor. The Villa in Tuscany has become throughout the years one of the major cultural and cosmopolitan symbols of Florence. The luxury Villa earned its reputation by hosting international guests of great importance, such as Princess Eugenia, wife of Napoleon III, and the Russian composer Tchaikovsky, and being considered the most beautiful residence of the Tuscan capital.

Now the Villa is a luxury hotel in Florence with 46 rooms and suites, divided into the main villa and in two adjacent guesthouses. In the main villa, there are 30 suites and rooms divided into 4 floors, each with its own style. The first, known as the "noble floor" is strongly characterized by its marvelous frescoes; the second dedicated to the ex-empress Eugenia widow of Napoleon III and to the roses that were her favorite flower; the third is the floor dedicated to the Orient.

The first guesthouse, overlooking the Boboli Gardens, offers 14 different accommodations, decorated and furnished according to the bourgeois styles of the late 19th century, and the spa.

The second small guesthouse located at the edge of the park that surrounds the main building of the Villa has a particular charm and discretion with only 2 rooms.

This luxury Villa in Tuscany is one of the most picturesque venue where an exclusive party, special event or wedding in Florence could be celebrated.

The picturesque green garden is a wonderful place for symbolic ceremony in villa and the exclusive halls are perfect for luxury wedding dinner in Tuscany.

« Villa 2 in Tuscany Villa on the lake »