Villa in the park on Garda Lake 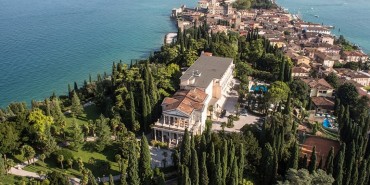 The Villa is located on the hill of the peninsula on Garda Lake. The house of the Villa was built between the greenery of the 5 ha park at the end of the 19th century by the German count Kurt Von Koseritz.

The front of the Villa was made in a rigorous neoclassical style, with great columns supporting the portico-facade. The Villa on the lake was adorned with veronese marble which was transported across the lake on barges and, still appreciable, are the frescoes, the stained glass windows and some original furnitures. After the Ist World War, the count was forced to leave Italy. The Villa and the park were first confiscated and entrusted to the local council, became property of various privates, who built the new wing in the 1952. Since 1953 the Villa is open as a 5 stars luxury Hotel.

54 rooms, various measures, some are located in the old Palladian Villa, the other are in the attached building born in the’50’s.  All rooms are elegantly furnished with antiques and precious carpets, parquet floor, Venetian glass chandeliers. Bath with marbles, separated bath tube and shower. All rooms face on the magnificent park and, through the secular trees, a breathtaking view on the Lake Garda.

The big park, surrounding the whole venue, is the the pride of the Villa. Big century trees and conifer trees coexist with high palms, lantana bushes, hydrangeas and myrtle. Unexpected corners on the rock, a real “lovers way”, the meditation bench, magnificent fountains and neoclassical statues, natural terraces facing the lake make the Villa an exclusive venue for wedding on the Lake Garda.

The Villa is a unique prestigious location on the Lake Garda, which guarantees to its quests total privacy. Your symbolic wedding ceremony among the greenery of the park and the wedding banquet on the open terrace with lake view will be completely confidential, invisible to all tourists and curious walking after the gate of the Villa.