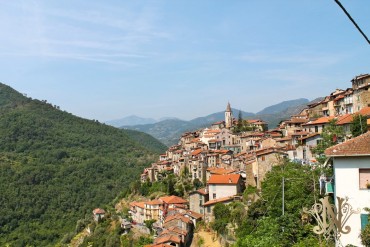 At the top of the castle is a large outdoor terrace with a garden. You can see from there the view on the heart of the village — its square with the fountain in the Gothic style, the medieval church and the Parish of St. Bartholomew. A great view of the mountains surrounding the village, buried in a forest of greenery, opens from the terrace of the castle. The village is alien touch of modernity: the graffiti on the walls of the narrow medieval streets, the steel monument to the book page of Claudio Enzo Pazzagli and Claudio Nobbio and the attraction of the village - the bicycle on the bell tower of the castle!

After careful restoration, the castle became the venue for cultural events, exhibitions and wedding ceremonies with official registration of marriage in mountains in Liguria. In the summer time civil wedding ceremonies are held on the terrace among the greenery of the garden.

After the ceremony in the gazebo located on the terrace, we can organize a quiet reception in honor of the newlyweds. In case of bad weather, the civil wedding ceremony will be held in one of the rooms in the attic of the castle, equipped as a museum.

Wedding in mountains of Liguria is for refined couples with the ability to hear the singing of a fairy chimney in the quiet of the mountain forest green, to feel and to enjoy the harmony of nature and art. Wedding in mountains of Liguria is also for couples wishing to get away from city life, family and friends and tell each other the long-awaited "YES" in the countryside, away from the hustle and bustle of guests.