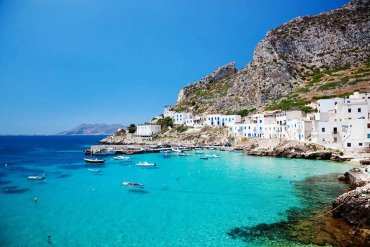 Sicily (it. Sicilia) is a beautiful and intriguing island in the Mediterranean Sea, that has preserved its pristine beauty.

Sicily is a land with rich history and culture, with numerous churches and temples, castles and palaces, theaters and museums.

The island is “home of mafia” because just on the island the italian mafia was born.

Sicily is also famous by its simple and tasty cuisine and fragrant wine.

The island is a wonderful place for wedding on the sea.

Taormina, Erice and Palermo are the most popular places for wedding on Sicily island.

Wedding in Sicily is a delightful romance about love of the divine beauty of nature, accompanied by an exciting voice of a sea surf.

Palermo is located on the northern coast of Sicily.

Palermo, with Rome , Venice and Florence, is recognized as a city of art. But Palermo is not only historic sites , it is also modern broad avenues , chic boutiques, beautiful villas and mansions , beautiful parks and, of course , delicious cuisine.

Mediterranean climate , sandy beaches , great locations , good infrastructure contribute to the non-stop flow of tourists , among which there are many couples decided to organize their wedding on the island of Sicily. Municipality provides for the official registration of marriage in Palermo a few sites : the former royal foundry hall, the Favorita Park , where the couple can plant their tree of happiness and municipal villa.

Taormina is a famous Sicilian resort located on the Mount Tauro. It offers stunning views of the sea and the Mount Etna. Taormina abounds with palm and cypress avenues, citrus groves, gardens with numerous flowers. The city is rich in ancient monuments, historic villas and palaces. One of these is the Palazzo Duchi , which hosts civil wedding in Taormina. The Palace was built in the 14th century and it is one of the masterpieces of Sicilian Gothic art, which merged the features of Arabic and Norman architectural styles. In front of the palace a beautiful garden is located, with its historical well in the center for collecting rainwater.

Erice is a small town in the western part of Sicily island located on the top of the mountain. It seems to be floating, soaring in the clouds, at an altitude of 750 meters above sea level. According to legend, Eryx (Erice), son of the goddess of love and fertility Venus, built on top of the mountain majestic temple in honor of his mother, and thus founded the city , which was named after him. In the XII century the castle surrounded by high walls was built on the place of the temple . It also was named in honor of the goddess of love Venus. Nowadays, the castle is owned by municipality of Erice and it is the venue for wedding ceremonies. Fascinating panorama of the immensity of the sea with prominent outlines the Egadi Islands on the horizon opens from the terrace of the castle.